Well  it start with the Austrians recieving orders that they were about to assault the french lines and there was nothing about it that was going to be easy.
Craig commanding the Austrains and myself commanding the french and dettermined that i would give hime more than a bloody nose.
Craig split his army into 3 divisions and procced to advance across the board 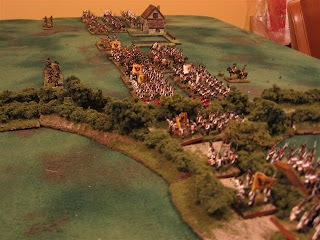 I decided that my best option was to split into two divison each of around 8 inf battalions and 2 cav the right sde supported by two artiilery batteries and the left by one. As you can see i held my forces in line using the fence to protect me against his artillery

this picture shows the left hand side of the field which was to end up folding uder a combined cavalry and infantry attack.

here they come there were4 Battalions of cav supported by horse artillery, the artillery was pretty inaffective right up till when it really counted and i recieved hits just before the cav ran me down half  guys formed square while the rest waited to die

As you can see these were the supporting infantry i managed to hold them back with volley fire but in the end the cav just did to much damage. below is just another short of part of this foce preparing to send my men to there maker.

on the left hand side of the field where sadly i don't have many shots ( maybe because Craig was busy shot his success on the other side). But here i had my old guard plus two elites doing there best to halt their advance. And doing a fine job i must say my artiilery here was doing a fine job while Craigs finally took out my guard, They do seem to attract those little balls of death.
This shoot shows my brave men waiting to recieve the enenmy , skirmshers out in front

while i was trying to stem the tide on the right Craig was putting presure on the left but here it was to become a killing ground for the Austrian regulars.

My lancers catch Craigs elites, we worked out later that i really couldn't do this move

The game was a good learning game as we hadn't played many games at this point. We both decided that Shako 2 is a great rule set. After two hours of gaming we called it a draw i held the left flank and Craig the right. lots of fun. you can also find Craigs write up on this game on the blogs i follow  uder Craigs gaming link
Posted by Galpy at 8:51 PM