We finished the last tutorial Painting old guard part one by applying the sky grey everywhere that the white will end up.

I've just driven for 4 hours to get home and know that i won't have any time this week to do much painting so have decided to do three figures so that i can finish the tutorial hope you enjoy it.

1. Now its time to add the white make, sure that you leave some of the grey showing through it will give depth to the white. On the belts i do long brush strokes either side leaving a bit in the middle and then paint across the belt near the top and bottom or any place the belt meets something else.

2. back pack first coat is in burnt umber

3. first layer of gold is done in shining gold (Citadel)

5. third layer is now done by painting all the raised areas in burnished gold (Citadel) sadly this picture doesn't show the effect very well. I don't add the wash to the buttons only larger areas, but I do both the other coats of gold on every thing. Gives a better finish
6. It's time to paint the first layer of the gun this is done inscortched earth (Citadel)
7. also at this time i've paint luftwaffe green 7823 base coat on the water bottle strap

8. Now it's time to paint the wood grain on the gun using Calthan brown (Citadel)

9. I now paint the highlight on the backpack using English uniform it shows up much more defined on the figure than it does in the pictures, paint along the egdes with smooth lines and then a kind of blotch paint the rest in leaving plenty of the first coat. 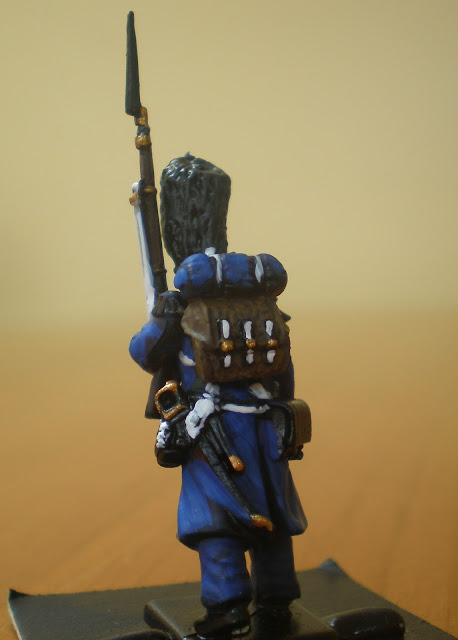 10. I've painted the water bottle in German camo Medium then later used a mix of sky grey just a very small amount mixed in with english unifrom to do a highlight painting across the bottle to give shadow effect this isn't shown in this picture. 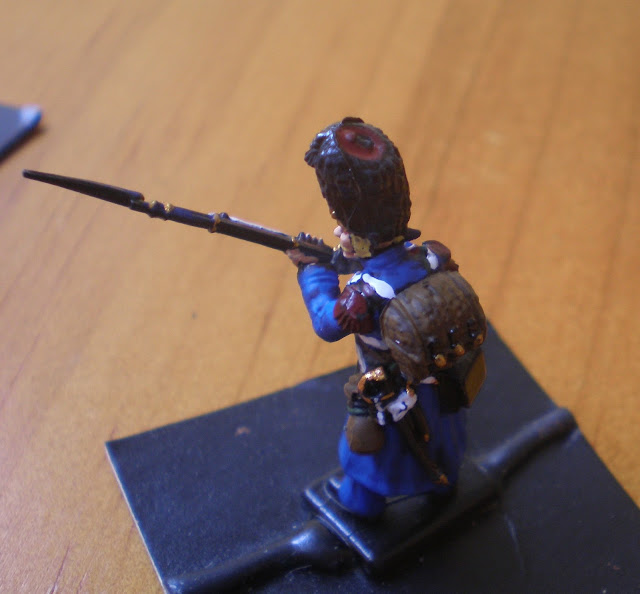 11. first coat of the red now is done by applying black red 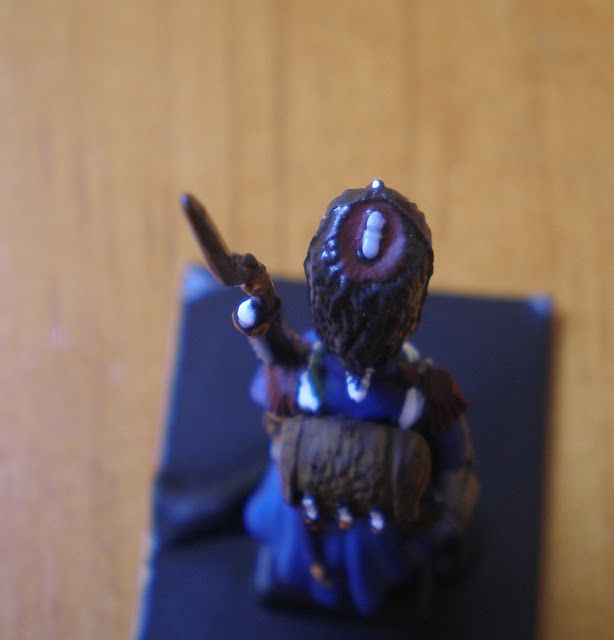 12. then i've applied blood red dabbing it around the centre leaving some black red to show through once again this gives depth to the eye. 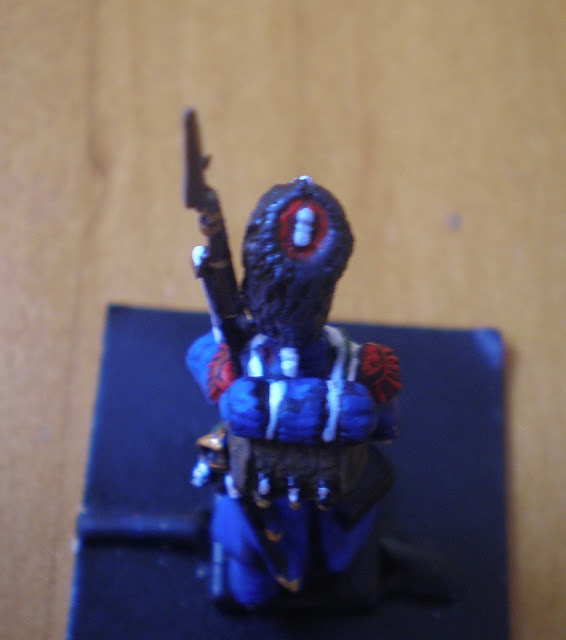 13. and Bolt gun metal(Citadel) to the gun on the next batch i do i will do a highlight of methal silver later(Citadel)
13a. time for the high light on the moo with Calthan brown (Citadel) 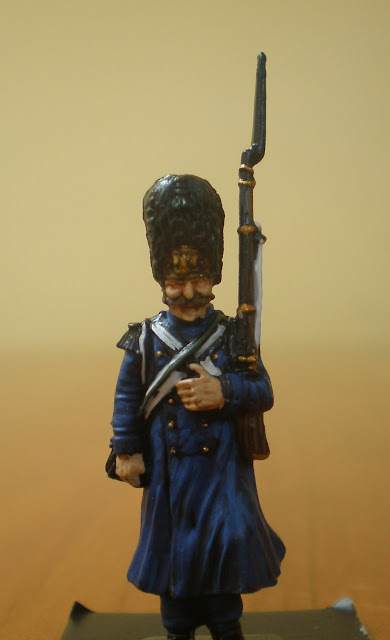 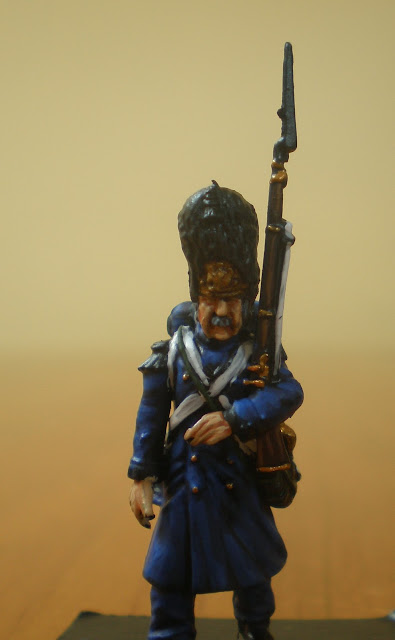 on this guy i used bleach bone as the second highlight i actually used a bit much on the fella but oh well better luck on the next one. the picture below shows the backpack and water bottle highlight a wee bit better. 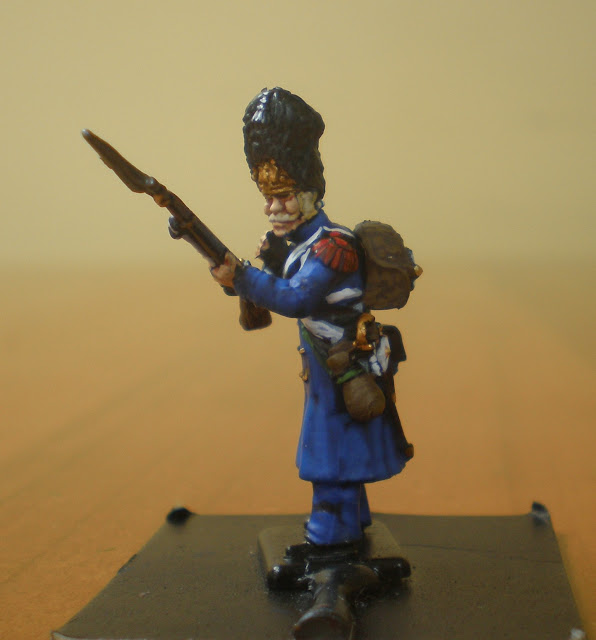 14. Now for the highlight on the water bottle strap German camo light green 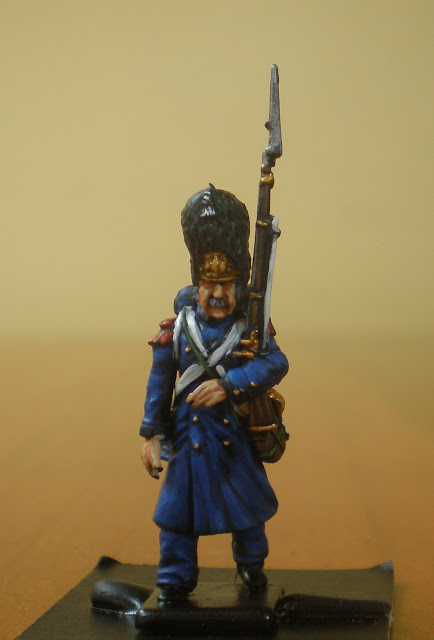 just a different angle  on the water bottles 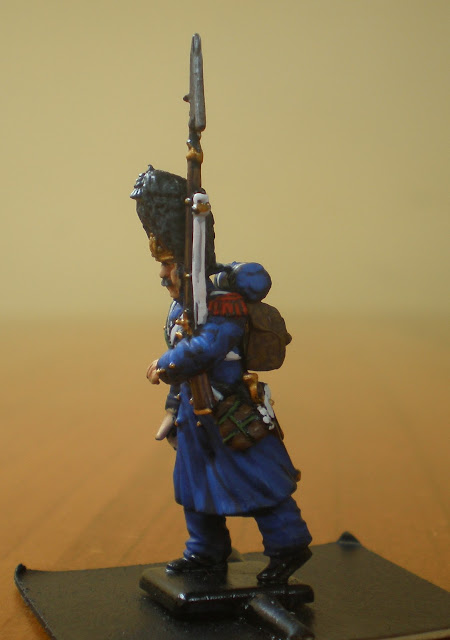 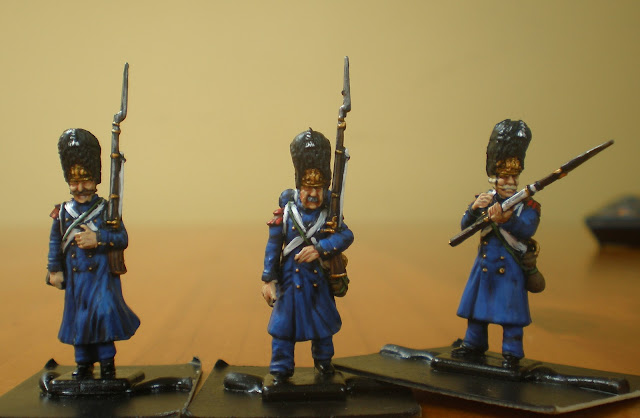 When I have finished all the stages i will put them all together as one big tutorial.
This is what I've done in the past three days
(All paints are Vallejo unless stated.) 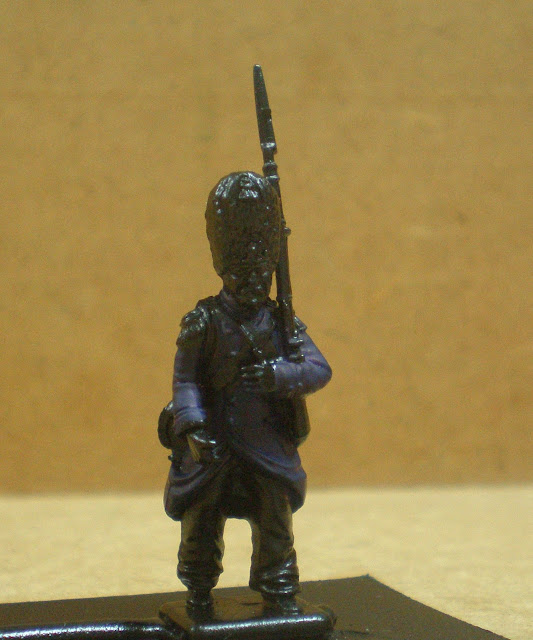 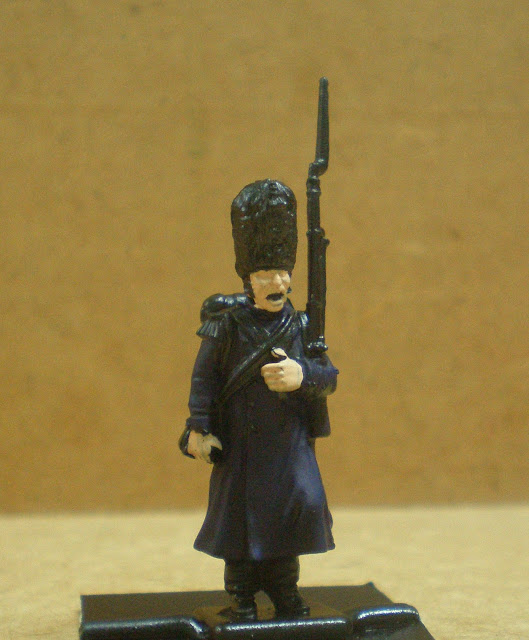 2. paint Flat flesh on all skin you can leave black where the mustache is
if you want i sometimes just paint it all in. The paint needs to be a good coat other wise when you put the wash on it won't look very good. 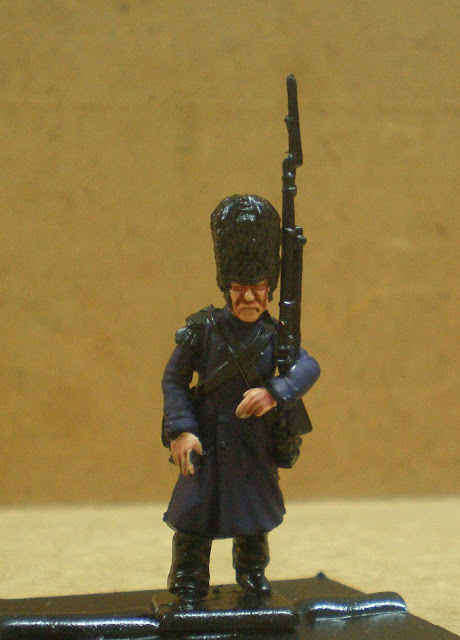 3. In this picture I've applied a coat of Citadel ogryn flesh wash, don't apply to much or the face will come out redish. 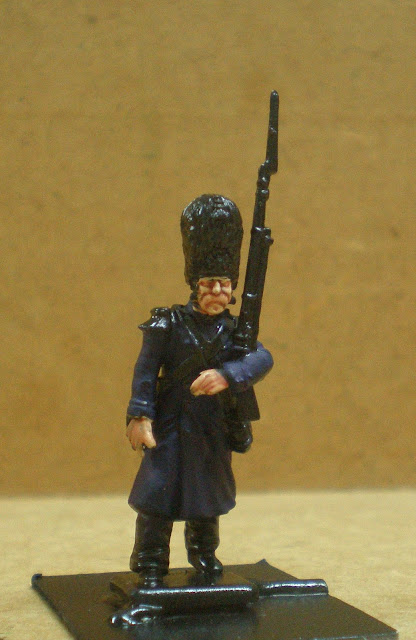 4. I've applied the flat flesh to the face  just on the raised pats  cheeks nose chin. The picture also shows  a face where I've complete cover the mustache, I would in this case paint the mustache black later.
Oh i dry brushed the hats because the gloss just got to me. 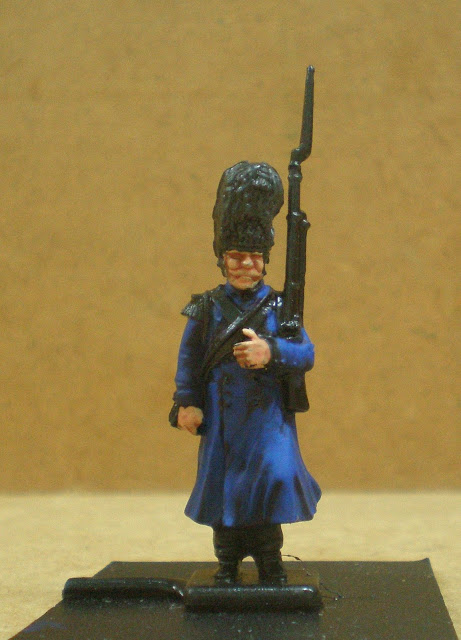 5. I've now applied the first highlight on the blue using intense blue. Apply the paint following the lines(creases) on the coat leave the shadow in the darker blue 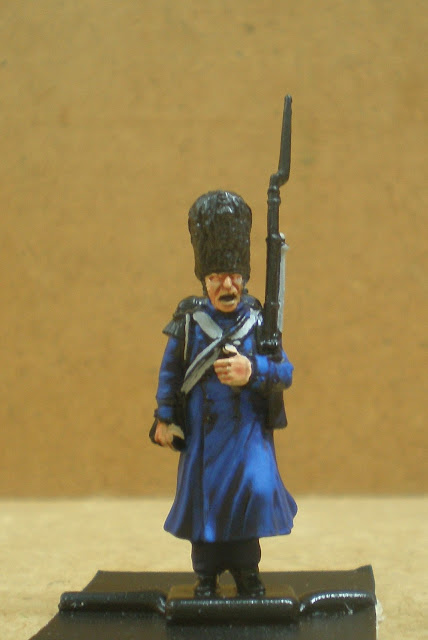 6. the figure below has the second highlight. This is done by adding a very small amount of sky grey to intense blue once again paint in the direction of the folds and creases on the coat only where the sun would hit,eg. tops of arms on the stomach area between the buttons paint across the figure sideways. Make sure not to cover to much of highlight one.


7. also I've apply sky grey over all the areas that will end up white


Here's the 60 figures that I've now been working on for the past three days.

I've finally got these lads finished ready to head off to there new home quite happy with the final result they will get a check over just before they go in the box i already notice a wee bit on a hat that need fixing but, its now onto the old guard which i stated yesterday they have there first coat of skin and blue on already so onward and upward 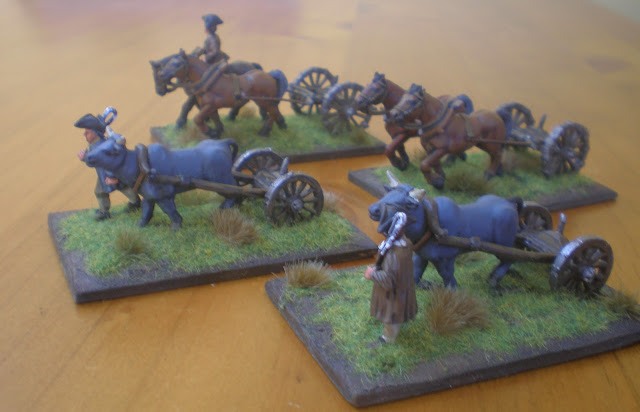 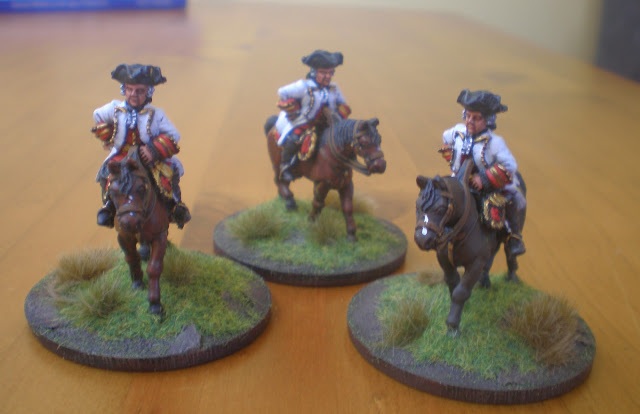 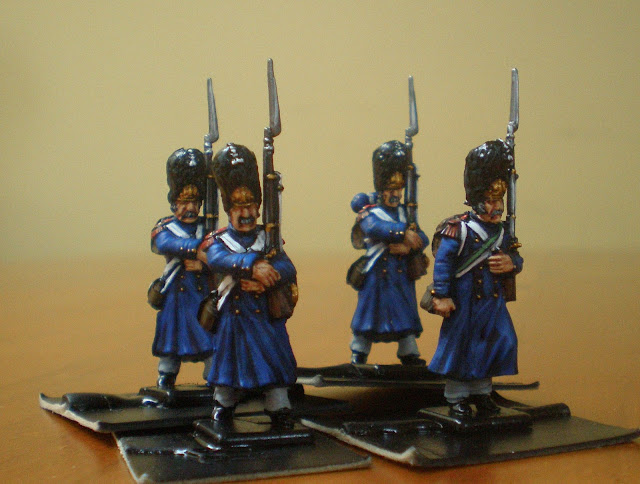 I picked up two boxes of Victrix old Guard the other day and sat down this afternoon to see how  I would tackle them. When i spray painted them the other day for some reason the mat paint came out glossy these guys still have the glossy black undercoat once i have finished them (the pants and shoes) i will gloss vanish them and dull coat them to see how the black finishes up but they have come out quite nice. I like the look of Victrix figures the only thing is that they break far to easily
Posted by Galpy at 7:31 PM 10 comments:

the ropes are made of wire

this was the first one took me a while to get it right but once i was happy i got to on the second one which came together real fast while it was drying i painted the command figures at the top .
tomorrow after church i'll paint up the bases and they will be ready to send off

last night lasalle down the club

Craig and i lined up the forces once again down at the club last night i was attacking so Craig set up his forces on the right and left hand sides of the table one artillery battery each side most of his infantry were deployed on the left hand side.

first round my artillery gets hits on Craigs far right infantry, I then send the boys marching up the flank and i sent my centrebattalion straight up the middle all seems well

My left flank draws nearer to distruction I manage to just hold this side which is not the best when i was the one attacking Craig was about to send in a unit of infantry and cav to finish me off when i jumped out of the building in the middle so he kept the units back to deal with them instead.

Everything seemed to be going well but after this shot Craig fires canister and also gets hits in defensive fire and in the assault knocks me back. I end up losing two out of three Battalions on this side and decide that its not wise to run down the edge of the table as i couldn't maneuver. Craig used his guns and musketry to slowing destroy me 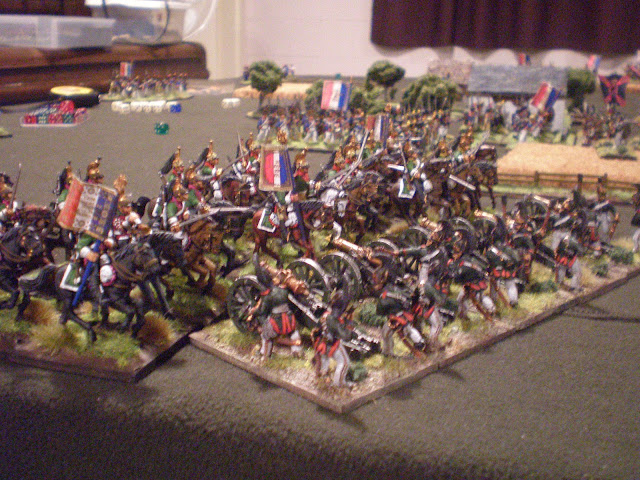 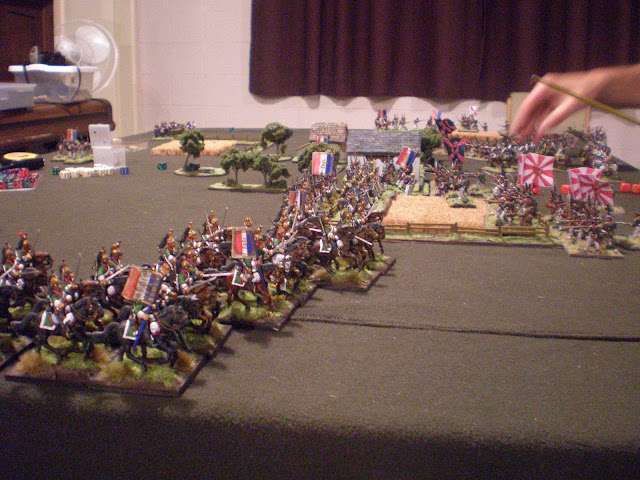 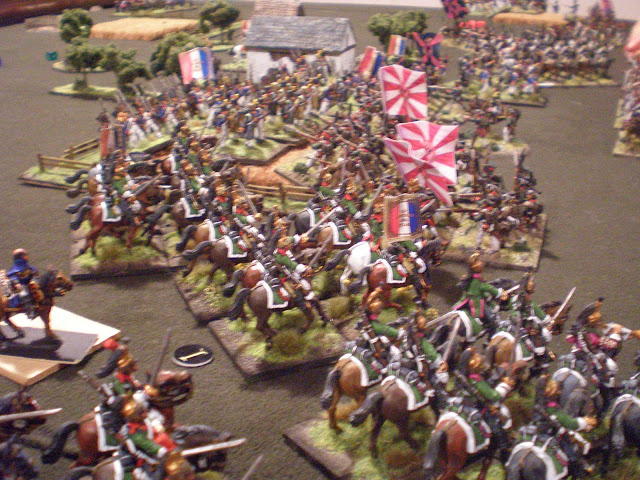 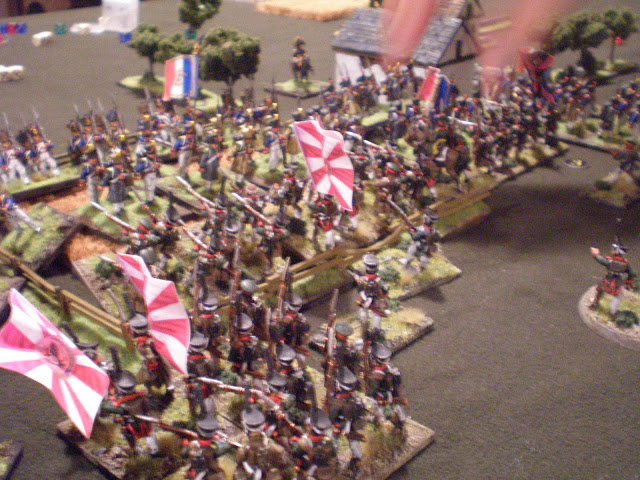