Well the weekend came and went and for some reason I didn't seem to get many photos ( probably because i was fighting for my life for most of the weekend), the first game was my only win 6-1 on a river crossing then i lost 4-3, 4-3 there were more panthers on the russian side than there were on the German thats late war for you
below are a few pictures of my first game.
Cal lined up his tank army and set off towards the minefields with a less than happy look on his face 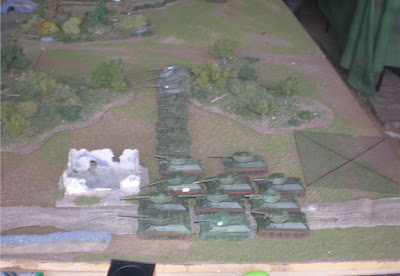 heres the other side . i started with two platoons of grenadiers on board lost only two stands of infantry after around 14 hits from the prelim bombardment 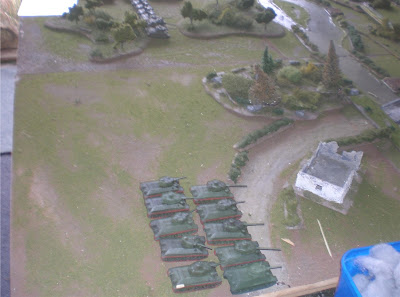 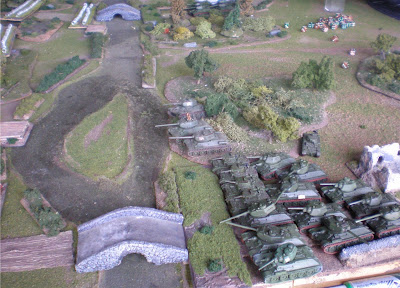 my panthers made it on first turn i sent them to the other side of the board and dealt with a break through which almost took the objective once i destroy those platoons i brought them back over to the right side to finish off what the mine fields hadn't destroy. In the end it was almost even mine fields verses panther kills
Callum through in a final desperate attempt to take the righ hand objective with two stuarts that i just couldn't seem to kill with the panthers, but sadly for Cal i had two panzer faust hits as he assaulted in and i killed both. 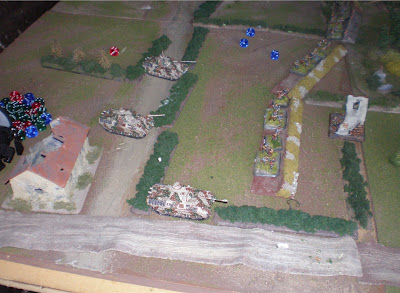 the game ended when i killed the 3 t34/85 on the edge of the forest, I had never won against Callum before and was very happy to get a win, he did say that i would have won even if i hadn't turned up because of the mine fields maybe he was right but i'll take the win. 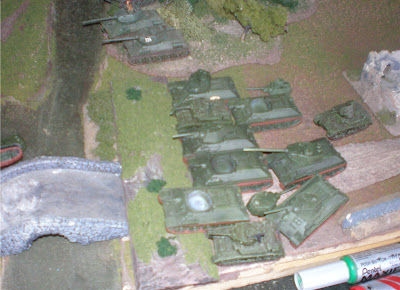 On the second game i lost on the last turn when Jamies artillery finally ranged in, La haye Sainte turned up on the russian fron strange that, it did look great full of German infantry with 4 Hmg's attached 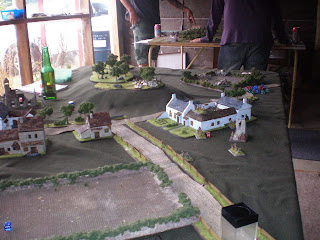 I almost took out 5 t34/85's when my pioneers turned up on thsi edge i bailed 4 with flame throwers killed 1 with a panzerfaust and failed my tank terror, for the next 5 turns he slowly killed two platoons with mg fire from 5 t34/85 and 3 panthers. bit of a shame really.

A really enjoyable weekend all round
Posted by Galpy at 4:21 PM